Puget SoundCorps members crawled out into the muck of a Puget Sound low tide last week to carry out efforts to restore populations of native Olympia oysters.

A week earlier, the crew members — working for DNR — spent an afternoon assembling decidedly low-tech equipment with a goal of solving a complex problem. Under the guidance of the Puget Sound Restoration Fund, the SoundCorps members cleaned and drilled holes in the spent shells of Pacific oysters and then placed them on dowels for deployment. 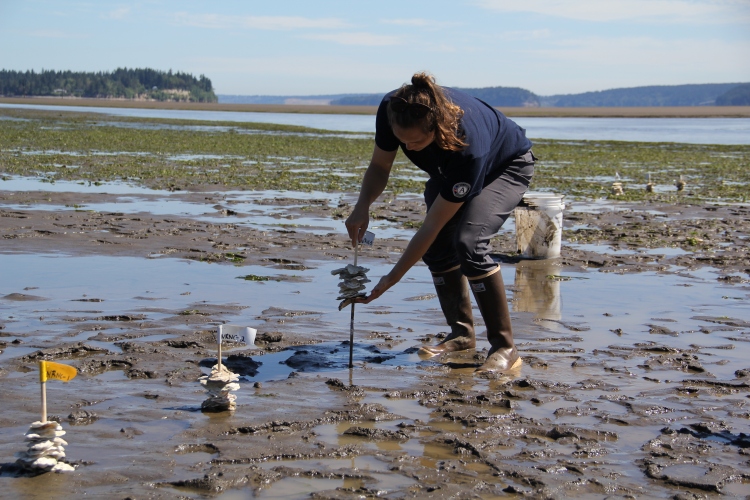 The idea is to set these “oyster kabobs” — as dubbed by King 5 news crews — in strategic locations to see which best attract baby Olympia oysters. They’ll return this fall to see how each spot did, and use that data to plot the best locations for focusing efforts on recovering the native species that can have an important impact on the health of Washington’s most important and heavily-used waterway.

The development of these Olympia oysters may also yield additional benefits. 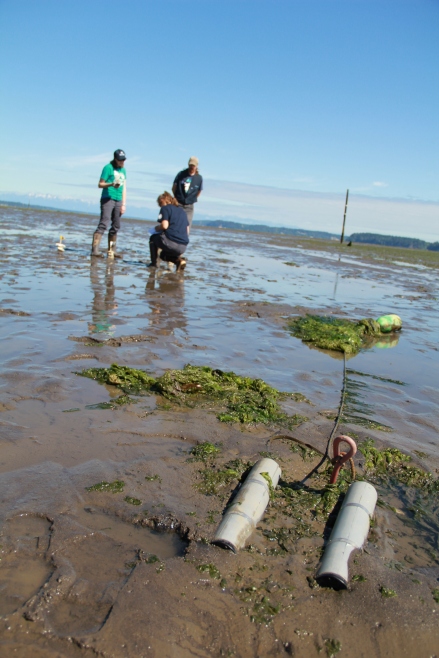 Next to many of the sites at which these oyster kabobs were placed lies sensors developed by DNR scientists to gauge the effects of ocean acidification.

Like climate change, ocean acidification is largely the result of increased carbon dioxide. The rise in acidity makes seawater corrosive to many marine organisms, especially those that require calcium in their “formative” growth stages, such as shellfish larvae.

Knowing the chemistry of sites where Olympia oysters successfully develop shells can give those in charge of ensuring Puget Sound habitat can function a picture of where waters may be more or less acidic. That information will allow DNR and the many other agencies charged with the mission of improving the sound’s health to better target their efforts.

We will keep you up to date on the latest news and developments around DNR’s involvement with ocean acidification as the work progresses.